The main function is to facilitate the Filtering/Grouping operation of Tags under a Metric, and also to improve the overall query efficiency.

The entire index is an inverted structure, similar to Lucene, but it is simpler, because there is no need to do word segmentation in scenarios such as time series.

Since the operation of string->uint32 has been done in Metadata, it is actually stored by numbers in Index, which further reduces the storage space.

The Forward Index is different from the traditional index. The traditional index will store each piece of written data as a forward record. The corresponding time series are the corresponding Tags of the Time Series, and these Tags pass through the string- After the >uint32 conversion, it becomes a string of data, so these data can be compressed into a Forward Index.

The following is an example to illustrate Filtering/Grouping.

The following table is the forward data corresponding to the Tags under a Metric(cpu), there are 3 Tags which are host/cpu/type

If the data in the above table is inverted, the inverted structure of the following table is formed, and the Posting List is directly stored in the Roaring Bitmap.

At the same time, based on this inverted structure, it may support some Metadata queries, such as wanting to know what Value is under the Tag of host.

As shown in the figure below, the forward data of a single Tag Key has been restored to Tag Key/Value => Series IDs for easy understanding. 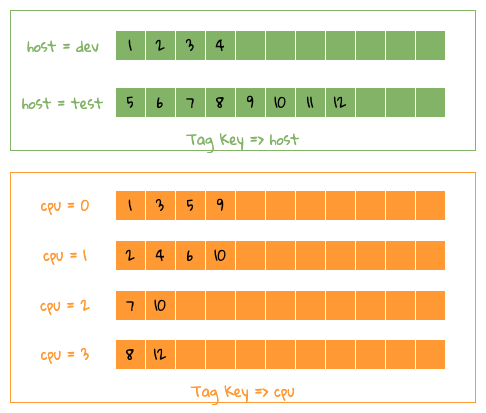 Let's take the previous example to illustrate how to get the data of Group By host, cpu 2 Tag Key, as shown in the figure above, in fact, as you can see from the figure, the whole operation is a merge Operation, there are 2 methods.

Combined with the structure of Roaring Bitmap High/Low Container, a Container can have up to 65536 uint16 values, so the memory usage can also be controlled, so we use Counting Sort method to The corresponding forward data is derived, and the overall process can be processed in parallel by Container.