For the replication of distributed storage, consensus protocols such as Paxos, Raft, and ZAB are commonly used in the industry. More than half of these protocols will sacrifice certain performance to strictly ensure data consistency.

The scenario faced by LinDB is that the amount of writing is huge, and the requirements for data consistency are not high. It also allows short-term data inconsistency and eventually consistent. Therefore, LinDB adopts the strategy that when successfully written to the Leader the write operation is successful.

Written to Leader is successful has the following benefits:

Written to Leader is successful, has the following problems:

In order to solve the above problems and try to ensure that data is not lost, LinDB adopts a multichannel replication scheme, as shown in the following figure: 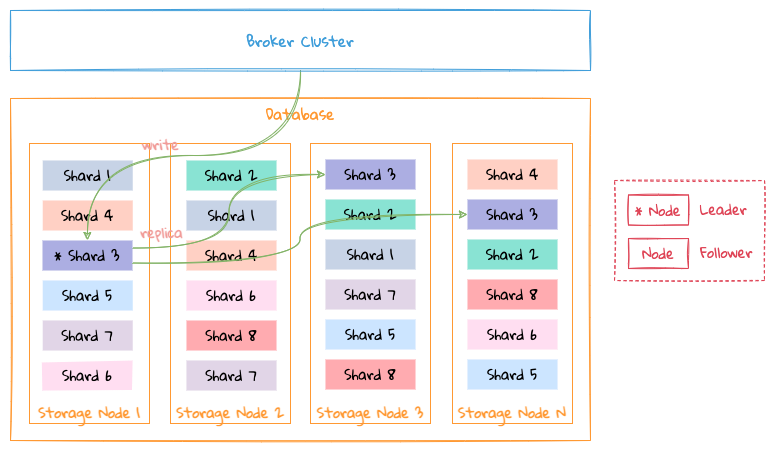 Take the data shard Shard 3 as an example:

Node 1 corresponds to the unique identifier 1 in the cluster, and so on for other nodes.

This way of replication solves the following problems:

Since a major feature of time series data is time correlation, LinDB also shards data by time according to this feature when storing data. Each time shard is a storage unit, so the actual replication channel is also stored with Units correspond one-to-one. 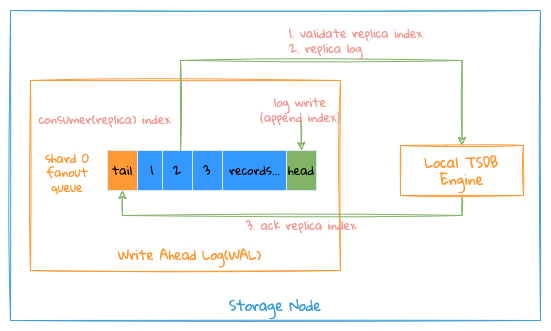 The entire Local Replication writing process is as follows:

Here are a few things to note:

Pick Node 1 as Leader in the above figure with 3 Replications replicating data from 1-WAL as an example:

Node 1 acts a Leader of the shard to accept written data from Broker, Node 2 and Node 4 are both Follower accepting the replication request of Node 1, meanwhile the 1-WAL channel is used as data write channel.

The entire replication process is as follows:

The process of Leader and Follower to initialize the replication channel is similar to TCP three-way handshake.

To ensure the sequentiality of replication process, it is necessary to ensure the order of the following steps:

Since the entire writing and replication process is based on the GRPC Stream long connection and single-goroutine processing mechanism, the above conditions can basically be guaranteed.